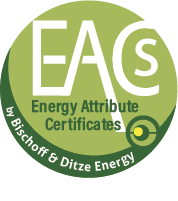 Energy Attribute Certificates (EACs) – as a generic term – are sometimes also called electricity attribute certificates, and furthermore include, according to the GHG Protocol “… a variety of instruments with different names, including certificates, tags, credits, or generator declarations.” To simplify the wording, the generic term certificates can be used also and then further specified by the terminology of the different tracking systems which exists worldwide.

RE100 lists as example number 1 – 3 as systems which track EACs, whereas The Carbon Disclosure Project (CDP) mentions additionally to the others listed also number 4 as an example for a tracking system. The GHG Protocol joins ranks and states in their GHG Protocol Scope 2 Guidance that “… this guidance also does not list all contractual instruments, energy attribute certificates, or tracking systems used to date”.

Bischoff & Ditze Energy has specialized in providing solutions for renewable electricity through EACs worldwide since 2005. Based in Germany we have a profound knowledge in a large variety of EACs, renewable energy tariffs and set up or own labels.

EACs systems mentioned by RE100, GHG, CDP and other:

Additionally, to the above mentioned EACs systems and registries other systems do exist, for example:

We have either accounts in the below mentioned registries, which cover a vast majority of countries around the world and/or we are member of below listed institutions:

If you, as a commercial customer, would like to use EACs for renewable electricity in different locations of your business group, please be aware that different countries have different tracking systems with different rules, regulations and registries.

Further details and much more information and tools regarding countries, tracking systems and the relevant voluntary systems like RE100, GHG Protocol and CDP are available for client parties in a customer-only area of this web page. If you are interested in doing business with us, please get in contact, we are looking forward hearing from you.